A couple of weeks ago, before summer showed up (how lovely that it now FINALLY has), and with a cheeky opportunity for date night on the horizon, we decided to brave the elements (the roof is off!) and head to Pop Brixton once again with a dining destination of Zoe’s Ghana Kitchen.

I wasn’t sure of the seating situation at Zoe’s so I did book a table, and on arrival we could choose between a couple tucked inside her designated shipping container, or go for the full alfresco experience and sit over-looking the throng at some painted tables. A quick check on the colour of the clouds and we decided to risk it, with a little warming help from two large beers to quench our raging date night thirst.

It turned out Mr Husband had been eyeing up the menu online and was very disappointed to learn that the dish he’d been lusting after, the Goat and Spinach Stew, was off for the moment due to not being summery enough, which I can understand (more now that it really is HOT). The starter we ordered (the Shito Parcels) wasn’t available too, having run out, which happens, but I do think if there are truly seasonal-only dishes that amending online menus is a good idea to avoid diner disappointment.

A few sad faces later and we got over it, ordered our food, and enjoyed some people watching looking down into the main open area while we indulged in the usual parent date night chatter of talking about our children (we’ve nailed the Little Man’s 3rd birthday party planning well in advance #parentwin) and happily munching on the spiced cashews. Nothing earth-shattering to report here, but if you like a nut then I’m sure these will satisfy your cashew cravings. 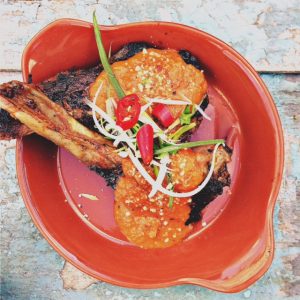 Then came an array of lovely looking things. The Grilled Lamb Cutlets with Zoe’s Spiced Peanut Sauce were tasty, but rather sparse on the meat-front. Two nibbles and you were done, which isn’t what I’d hope from an £8 dish. Especially when you’re massive carnivores like we are. Again the Tilapia Fillets in Aduna World Baobab Butter (£7) felt a little ungenerous, just one small fillet (not filletS) for us, which did deliver on the citrus flavour the menu promised, but was slightly over-cooked. 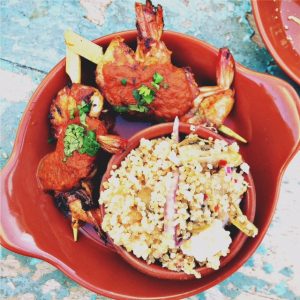 However, the Ghana Style Butterfly Prawns marinated in onion, ginger, garlic, lemon juice and with a hint of thyme and cayenne pepper (£7) were fresh and delicious, and came, rather than the roasted garden eggs the menu promised, with a quinoa & feta salad which was an unexpected triumph. Zoe’s Jollof Spiced Fried Chicken (£7.50) was nicely crispy, and our Jollof side (£3.20) – spiced fragrant rice cooked in tomato sauce, was another solid dish. A real highlight for me though were the amazing Plantain Chips (£3.20), caramelized and infused with nutmeg, cinnamon and ginger, they were unbelievably moreish and their sweetness really complimented the spice of the rest of the food. Mr Husband is not a massive fan of sweet savoury food, but even he conceded that these were super.

Overall it was good food, just lacking in a sense of generosity that would have pushed it into being great. Our bill came in at just under £50, which you can’t really argue with, but I’m going to – got to keep an eye on what’s left in the beer kitty when you’re on date night after all. I did feel that had some of the dishes cost slightly less (the cutlets for example) it would have felt like brilliant value, or else I would have been happy to pay a bit more for a better portion. Basically, meat-me-more.

It did really feel like sunshine food though, even on the grey Saturday night we went, so if you are in the area over the summer and fancy some cheapish food that packs a punch, with some Pop Brixton people-watching thrown in (midriffs aplenty now I bet), then this is a good choice. Just definitely make sure you have the plantain chips and the prawns!

This was first published on Brixton Blog.